As rates of extinction accelerate, biodiversity is being increasingly recognised as essential for all life on earth, including underpinning the food we eat, the air we breathe and to help tackle pollution, flooding and climate breakdown.

To promote biodiversity, the Users Trust planted new woodland at the south end of the Meersbrook Park around twenty years ago and have allowed a marshy area to develop near the bottom of the park. Meadows have recently been allowed to grow in other areas of Park. Since this began in 2012 the following changes have been recorded:

Over 150 starlings have been feeding on the new grassland, the most ever recorded on site. This species hunts invertebrates in grassland, primarily Leatherjackets and earthworms. Leatherjackets are the larvae of the crane fly that feed on plant roots. It may be that the increased vigour and sugar content of the grass as a result of the lack of mowing could have increased the numbers of Crane fly. 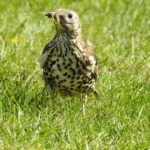 Numbers of Mistle thrush and Song thrush feeding on the grassland and Swifts and bats feeding over the grassland has increased, probably also as a result of increased sources of prey.

There has been an increase in sparrows and finches.
Allowing the grassland to flower provides a rich seed source for such seed eating birds. Wild flowers like Sorrel and Hawkweed are particularly important. 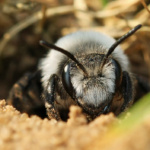 More pollinator species, such as solitary, ground nesting bees have been observed. The thin soil of the park’s grassland is ideal habitat for mining bees and the lack of mowing and increased availability of wildflowers appears to have boosted numbers as well as diversity.

Grasshoppers have been seen for the first time on site. They are indicators of healthy grassland ecosystems and like Mining bees are particularly fond of the thin soil and sparse vegetation of acid grasslands.

Another species that it would be desirable to attract is the Willow tit. This needs scrubby wet woodland which could be created by some well-placed logs across small stream channels. This would also have the benefit of reducing silting and flood risks further downstream.